Matrix Trade Institute is licensed under the Ohio State Board of Career Colleges and Schools Registration No. 2144, and Member of Beachwood Chamber of Commerce

MTI Mechanic Spotlight: Ryan Frank Goes from Lube Tech with a Bad Attitude to Efficient and Confident Mechanic in 8 Weeks By Dustin Peugeot on  July 31, 2019 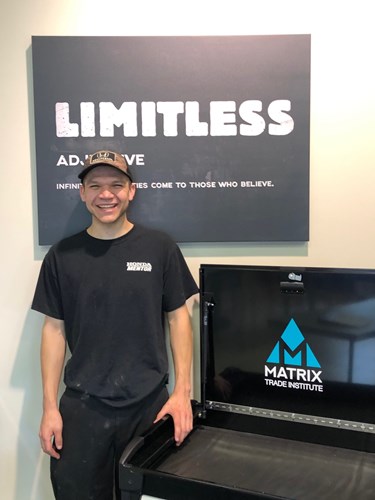 Ryan Frank had one foot out the door. At 21 years old, he was an hourly lube tech at Honda of Mentor, producing only 15 hours per week. It’s no wonder he was considering a career change.

His service director, Gary Dalton, wasn’t sure Ryan was going to make it. He could see glimpses of talent, but it was overshadowed by the chip on Ryan’s shoulder. Ryan’s bad attitude stemmed from a lack of confidence and insecurity about his ability and career path that often overwhelmed him. Gary knew he could trust Matrix Trade Institute to turn Ryan’s attitude and career around.

When Ryan came to Matrix for the pre-assessment interview, he said he could tell they were serious about making him better and had total confidence in the process right from the get-go. He said, “I realized then it was up to me because this is exactly what I needed and it was right in front of me.”

After completing all four UpSkill Efficiency Bootcamps, Ryan nearly tripled his productivity, flagging nearly 40 hours a week while still on the lube rack. He cites the small class size, hands-on repetitions, and the positive attention of the instructors as the key difference makers for him.

“Matrix pushed me and made me believe in myself,” Ryan said. “I started looking forward to going to work almost immediately because for the first time in my career I had confidence in what I was doing and knew they believed in me. If Gary hadn’t supported me and given me the opportunity with Matrix, I wouldn’t be at Honda of Mentor. It was everything to me.”

Ryan will soon be promoted to the line and can’t wait to attack the flat-rate compensation plan soon.

“The Matrix training turned Ryan around,” Gary said. “His attitude, his work ethic, his confidence—it was almost an immediate change. We’d have lost him otherwise, and I really don’t know what Ryan would be doing. Now, I’m throwing him everything from alignments to electrical problems to brake work, and he’s killing it. He’s looking to increase hours and find efficiencies and is so engaged that he wants to work extra when it’s there. He’s going to be a real leader for us going forward.”

Shops that don’t actively accelerate young tech growth are at the same risk of losing them just like everybody else. The only problem is, how will you find the time or resources to train them?

Matrix Trade Institute’s revolutionary UpSkill Efficiency Bootcamps can help you retain and grow your technicians to be productive, efficient and confident in upselling and performing basic operations. We offer two-week, 30-hour UpSkill Training for steering and suspension, brake repair, basic electric, and general service efficiency to help dealerships and repair shops increase the potential of their technicians by being more productive and efficient. Over the course of two weeks, your employees will split their time at your shop and our training program to keep production going.

Contact us today to learn more about our UpSkill Training and see how we can make your workforce more profitable for you.