Techs of the Future: Cracking the Code to Recruiting and Hiring Collision Repair Technicians By Dustin Peugeot on  November 20, 2020

Techs of the Future: Cracking the Code to Recruiting and Hiring Collision Repair Technicians

Collision repair owners and managers across the country say hiring technicians and high turnover rates have become critical issues in their businesses. 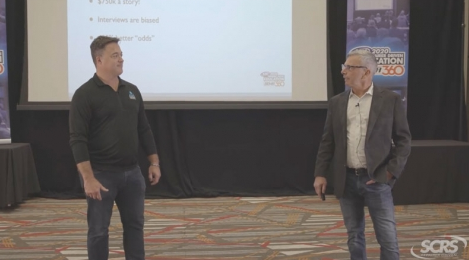 Employee engagement may be the key to solving these problems, according to Dustin Peugeot, owner of the Matrix Trade Institute, and Kevin Wolfe, owner of LeadersWay.

Peugeot and Wolfe recently discussed how to “Crack the Code” to technician recruiting, and offered innovative solutions for shops to maximize the efficiency and retention of current employees. Their presentation was held as part of the Society of Collision Repair Specialists (SCRS) Repairer Driven News Series during SEMA360.

Wolfe cited a Gallup poll conducted in June that addressed the engagement and well-being of the workforce. According to the poll, nearly 70% of U.S. workers said they were either actively disengaged or not engaged at all at their jobs.

“In almost 20 years, we’ve done almost nothing to better the work conditions for the people who are showing up every single day,” said Wolfe. “Yet, organizations continue to move away or shy away from leadership, coaching, training and working at all levels to develop people.”

When Wolfe visits collision repair shops, owners often complain about employee retention. In response, he tells them, “You already have the talent; your job is to develop it.”

“Our time is valuable… hiring and firing take away our ability to make money,” added Peugeot. “If we can focus more on retaining and growing our employees, they will do the recruiting for us, and then we can do what we are really good at---making money in the collision industry.”

Peugeot said nearly 60% of people who complete a collision repair training program defect from the industry in 11 months.

“We have a retention problem in our industry, not a recruiting problem,” he said. “We have to find ways to make this industry more palatable and exciting for them and not just get frustrated when they act exactly the way we assume they would during the interview process.”

Wolfe said upgrading organizations and moving into a 21st-century economy are crucial for survival, especially now during the pandemic.

“You can’t sit back anymore and pretend that you can continue to go on this way,” he said. “You can’t achieve great results with the wrong people!”

Peugeot and Wolfe offered seven steps to cracking the code to talent and developing the potential of the people who show up to work every day.

“We have to start looking everywhere,” he said. “Talent doesn’t just exist in somebody’s backyard with a young person who likes to be under the hood.”

Peugeot said employees care about working at a business where they can grow and there is a clear career path to follow.

“We should constantly be recruiting those from all angles of life who want to work hard and make money and feel great about a skill,” he said.

Networking with the local Chamber of Commerce, a Rotary club or PTA meetings can also be helpful when looking for employees. Ultimately, the goal is to become a talent magnet.

“Becoming a talent magnet means being a leader who is developing people every day---not just when they have time,” said Wolfe.

An important part of cracking the code is how owners and managers approach the interview process. Typically, when bringing in new people to an organization, interviewers will ask basic questions such as: You work(ed) for XYZ Collision? Do you have tools? Are you I-CAR certified? Will you work for our company? When can you start?

“I don’t want to bring in someone for an hour if I know right away that I’m not going to continue with them,” he said.

Second is conducting what he referred to as a top-grading interview, going through the person’s resume and references. Peugeot said this demonstrates to potential employees that you care and are going to look into their background.

“If you let them know you are disciplined enough to make a couple of calls and read more than the first seven lines, it lets the candidate know you are taking this as serious as they are,” he said.

During this stage, Wolfe and Peugeot advocate conducting an assessment of a person’s technical, personal and cognitive skills.

If the candidate seems like a good fit for the organization, the final step of the process is conducting a focus interview. This involves bringing the person in to work with the team and determining how everyone gets along.

Prior to hiring someone for a certain position, Wolfe suggests determining what that job will entail, the duties the person will have and the results needed to be successful.

“It often surprises me how many organizations lack clear expectations,” he said.

Wolfe often asks organizations if they are playing checkers or chess.

“Average leaders play checkers---they think everyone can move the same way,” he said. “We force people into roles that aren’t good for them and then blame them because they don’t perform. Great leaders play chess.”

Once those expectations are set and the business owner has determined the candidate will be a good fit, Peugeot advises selecting the person based on fit and comfort: “Do they define success the way we want them to and are they going to be comfortable doing it because we want them to?”

Once an employee is hired, development becomes paramount both personally and professionally. The No. 1 reason that will keep a person in an organization, according to Wolfe, is a shop’s investment in development.

“It’s not just enough to develop the professional talents of people, but also invest in the personal side as well and help them become better humans,” said Wolfe.

In terms of personal development, Wolfe said to focus on skills that will enable individuals to learn to communicate more effectively to the people they will be working with.

“Historically, great teams are those who care for each other and help one another,” he said.

When it comes to professional development, Peugeot recommends building their pride through education.

“Without pride in what you are doing, development, growth and efficiency don’t occur,” he said.

When employees demonstrate pride in their work, Peugeot said to then focus on proficiency, teaching them how to “do it right every time,” while ensuring they understand what they are doing. Ultimately, their confidence will grow through hands-on learning and they will become more efficient.

As a business owner or manager, Wolfe said it’s essential to guide employees.

“Cracking the code is all about becoming a better guide,” he said.

This doesn’t mean doing the work for them, but demonstrating how to do it correctly and supporting their development. Peugeot said this takes discipline and commitment.

On day one, he recommends providing employees with the tools and resources they need to do their job effectively. Although it requires time and money, he said it builds proficiency and confidence.

An additional way to show support is having constant communication with employees.

“People need to know what’s going on,” said Wolfe. “One of the biggest deficits in an organization is not communicating with employees or thinking they can’t handle the information.”

Peugeot suggests appointing someone in the organization, other than the owner, who can deliver consistent positive and negative information to employees.

Wolfe said accountability is often a misunderstood concept, and many business owners believe that caring for employees and taking actions that help them get better is the soft side of business.

“The easiest thing to do as a manager is to walk by a problem and commit that you will deal with it next time because you are busy now,” he said. “Being a good leader is knowing that it’s your job to take time and stop and have what can be perceived as a hard conversation.”

Rather than being a negative meeting, Peugeot said it can be a positive coaching session, where leaders share clear expectations, offer consistent feedback and remember there is “no negotiating on results.”

Even if business leaders follow all the steps involved in hiring and developing employees, Wolfe said the environment must be right, or they won’t stay in the organization.

“People stay in healthy cultures and organizations that treat them as people, invest in their development and consistently challenge them to get better,” he said.

“People aren’t going to work for you and do their best for you because they love you. It doesn’t matter how nice you are,” said Peugeot. “If you give them an environment where they can take pride and love themselves for what they do, then you’ll start to realize exponential growth and opportunity.”